1) OpenCollective as a new funding stream

We have added OpenCollective as a new and easy way to donate to OpenWorm. Regular contributions to the project (monthly/yearly) are possible through this funding stream. See here for more details.

One of the first uses of these funds will be to support OpenWorm Studentships (see below).

OpenWorm Studentships are a new way to incentivize contribution to the OpenWorm project, offering small stipends and recognition to junior researchers who want to spend time bringing their research into OpenWorm and making it more accessible for the wider community. See here for more information.

The first person to complete an OpenWorm Studentship project has been Tyson Wheelwright. He has made significant updates to the Blender 2 NeuroML subproject. Figure showing a single cell (ADAL) highlighted in orange in the original 3D Blender file (from the Virtual Worm Project) on the left, and corresponding images of the cell on its own in Blender (middle 2 panels) and in NeuroML 2 format (right 2 panels). The NeuroML version is being used in our biophysical model of the worm nervous system. See here for more examples.

More Studentships will be offered to the community in late 2022.

The recent paper NeuroPAL: A Multicolor Atlas for Whole-Brain Neuronal Identification in C. elegans described a groundbreaking new technique to create a genetic strain of the worm where each neuron is labelled with a fluorescent marker of a specific color, allowing easy identification of neurons across experiments and animals.

We have converted one of these datasets containing positions of cell bodies and the expressed NeuroPAL colors to NeuroML, to allow it to be used in OpenWorm models and associated applications. Full details can be found here. 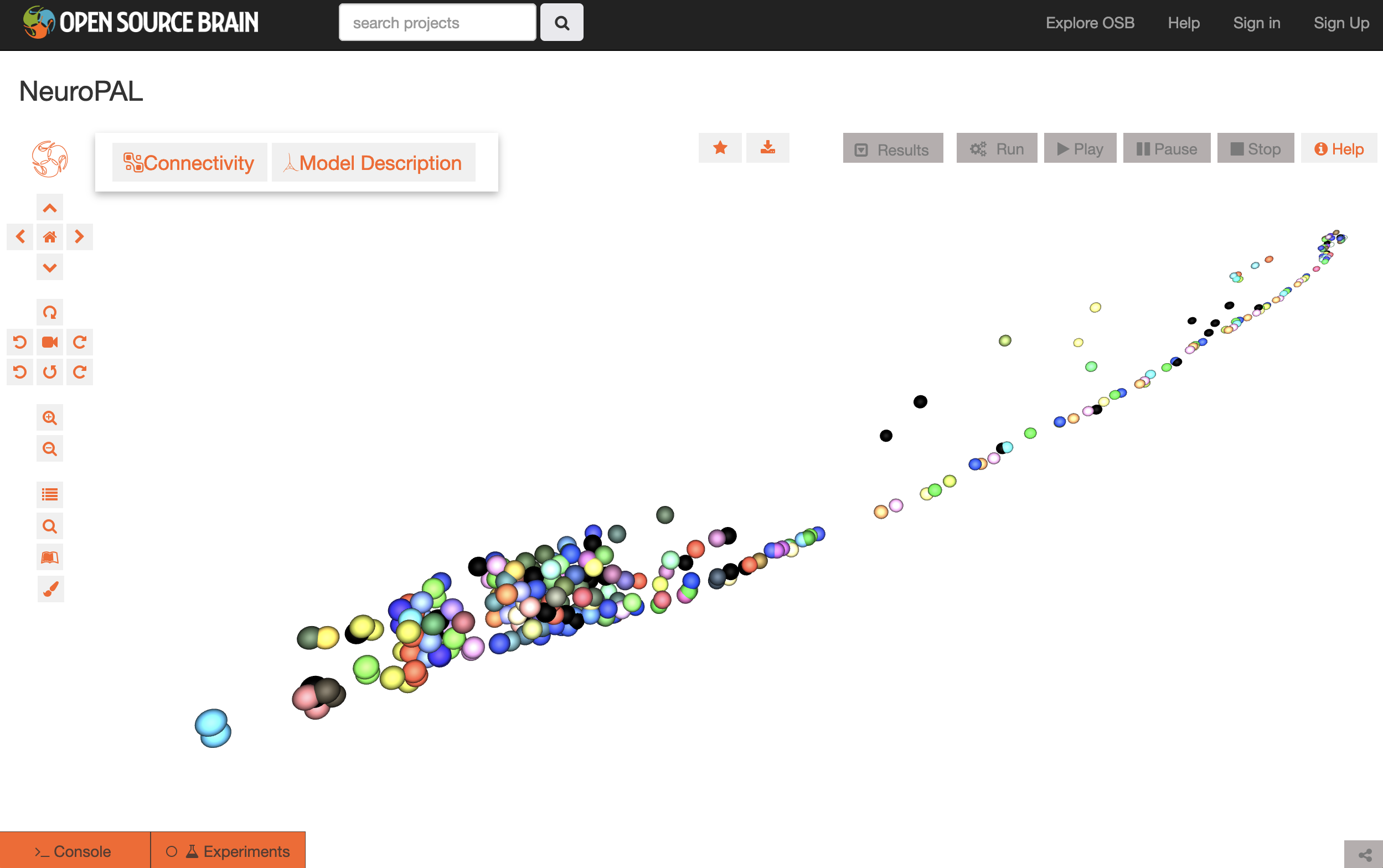 The above image shows the canonical positions and colors of a NeuroPAL dataset which has been converted into NeuroML, allowing it to be visualised on Open Source Brain.

Electrophysiological recordings of the activity of the ASH neuron made by the Wormsense Lab of Miriam Goodman were converted to open, standardized Neurodata Without Borders format as part of a Google Summer of Code project in 2021 by Steph Prince. Further details, as well as all of the converted datasets, can be found here.

A view of the NWB Explorer interface showing one of the converted electrophysiological datasets. Click here to explore other datasets and get direct links to NWB Explorer to browse them. 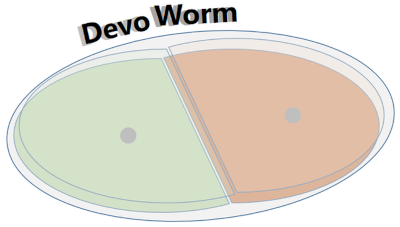 Over the past year, DevoWorm has been involved in a number of initiatives. DevoWorm hosted four Google Summer of Code students in 2022: Karan Lohaan and Harikrishna Pillai worked on the Digital Microspheres project (a spherical platform for embryo data), while Jiahang Li and Wataru Kawakami worked on developing a Graph Neural Network pipeline for the DevoLearn platform.

DevoWorm also had a presence at NetSci 2022 (virtual conference hosted in Shanghai). Bradly Alicea presented on the group's Embodied Hypernetworks work in the main conference, as well as serving to represent the group at the Network Neuroscience satellite session as a presenter and participant.

Our weekly meetings are a continuing success. We cover a number of technical topics and a wide variety of topical reviews spanning biophysics, developmental biology, computational analysis, and more. Join us on Mondays at 2pm UTC (1pm UTC in winter) to get involved.

We have made a new release of the Docker container that pulls together the major components of our simulation stack and allows it to be run on your machine. It includes Sibernetic, c302 and owmeta. See details here. 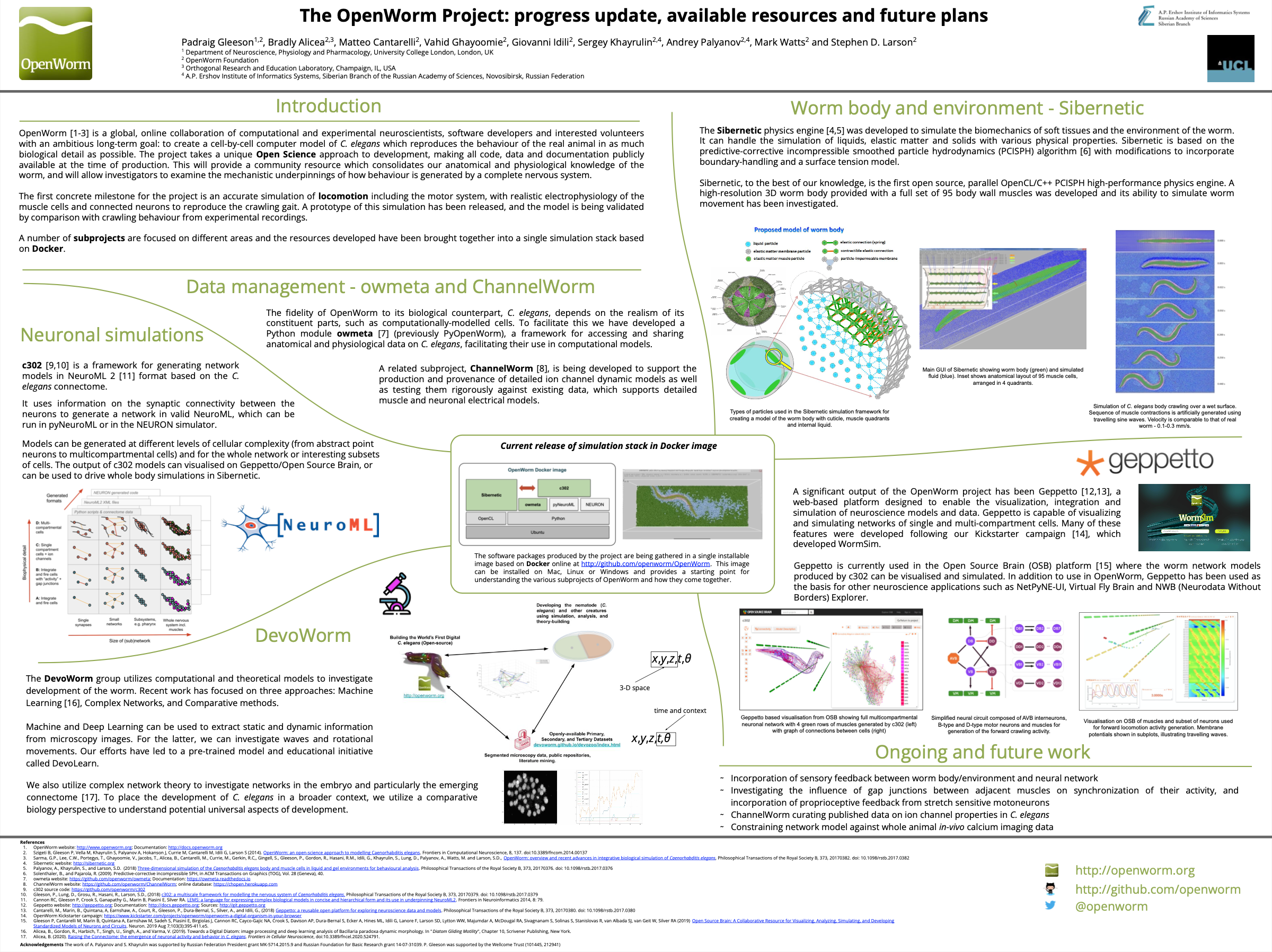 A poster presenting the latest status of the OpenWorm project was presented at the main global conference in the C. elegans field in June 2021. Click on the image above to download the poster.